This is the name of the article from Juraj Droba which has been posted on blog.sme.sk and has been commenting about disapproval of changing the proposal to the Law on Road Trafficon the Parliament meeting. One of the proposalsdealed with the issue of cyclists and it was meant to avoid the arogance of automobile drivers toward cyclists. It was from the same circuit of regulationsas keeping the 70 metres distance between cars on the highway. But in the end it’s better that it hasn’t been approved.

Our laws include many ridiculous things that we have to follow but there is no possible way how to control them or how to punish breaking them. This changing proposal was about to give the drivers obligation to keep the distance between their car and the cyclists they’re about to overtake in one and a half metre. It looks like wise decision. But is it really? Will we have to put the measure machineof the distance on the cars or will we make another law for cyclists to have them on their bikes?

As one of the active cyclists who sometimes gets to ride across the first class roads even in the town, I know very well what the aim of the submitter was. But am I asking too much when I expect that the member of the Slovak parliament and a cyclist will after defining the problem will also assert its effective solution?

Let’s give the word to the blogger, the member of the parliament:
Oponents of our proposal has been objecting unenforceabilityin the first place due to impossibility of measuringof the distance and charging the possible law breaking. But they didn’t get the point of our proposal. Present law defined the obligate distance as „obligate side distance“ which for some Slovak automobile drivers is sometimes only 20 cm. You, who drive the bicycle, surely know the feeling when you are „blowned“ in the small distance but big speed by the car and the pressure of the air moves not only you but the whole bicycle. Hand on the heart: how many times during the year do you get into the situation on the road with a bicycle when you thanked God for surviving? I appear be in them for at least 2 times a year and I drive the bike less since I got myself a scooter.

The law defines the obligation clearly. If the cyclist is endangered or he has been crashed then the „obligate side distance“ hasn’t been adhered it means the car driver should be punished. But where are the police men who are supposed to take care of it? What are the members of Parliament doing when they don’t call for consistentadherance of already existing regulations, but they think about new and not possible to enforce instead? 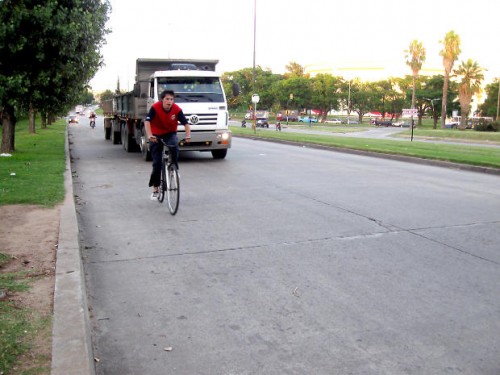 Another contraargument: how to overtake the bicycle in the narrow city street keeping the one and a half meter distance? My answer: not to. The typical narrowcity street in Bratislava has very rarely more then 200 metres, it is generally one way and when the bicycle rides 20 kmh/ on average, it passes these 200 metres in 36 seconds. But will the car driver be patient enough not to overtakethe bicycle for half a minute? I think he should be.

Our proposal has simple message: when I overtake the bicycle, I have to do everything I can not to endanger the cyclist, not even theoreticaly. One and a half meter is something that everyone can imagine and the logic tells me that if there has been talk about this proposal in a public place the car drivers would pay more attention and start to realize that there are also single-trace wehicles, bicycles, scooters and motorbikes. And it would be a major change in the heads of Slovak car drivers.

Regarding overtaking in narrow places I can nothing but agree. And I have many personal experiences, wherther from Orlické hory, Vysočina, Šumava or Lednicko-Valtický areál, that the car is driving behind of me as long as the driver has adequate view and a space for overtaking me safely and not endangering me, themself nor anybody else.

Careful reader has surely observed I am talking much about the places in the Czech republic. And I am concerned that there is no regulation about one and a half meter distance between the car and the cyclist (or the bicycle?). Yet I have been in a situation when in the middle of the summer vacation season the traffic inspectorate of the Regional Traffic Inspectorate of Vysočina has patronage of the cyclists and dare some car driver use claxon on the bikers! 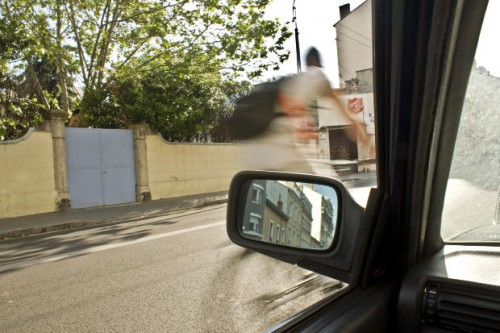 Unfortunately, I cannot report such a positive experiences from Slovak regions, not even from Slovenský raj (Slovak Paradise). Laws have put helmets on our heads, it was very close to enact wearing a warning vests but there is no law that can protect one participant of the traffic jam from another as long as there is no mutual respect between them which should be enforced by fines when the harm is done toward the weaker.

The lawgiver should lead his effort to the situation when the bikers will no longer be considered as wretches by the rich men because of the well-established fact that they can only afford bicycle while rich can have a seaside vacation. Often the bicycle is more expensive than the seaside vacation itself. The bikers should be considered as equal participants of the traffic jam since they pay the same road tax as any other participants. The society should understand the meaning of the cycling not only as a sport but also as an instrument for relaxation, keeping the good health but also as a method of tourism and an opportunity to earn Money.

To write a proposal to a stupid law and then cry over its rejecting by the SMER party on ones blog can be done by anyone and there is no need for university degree. 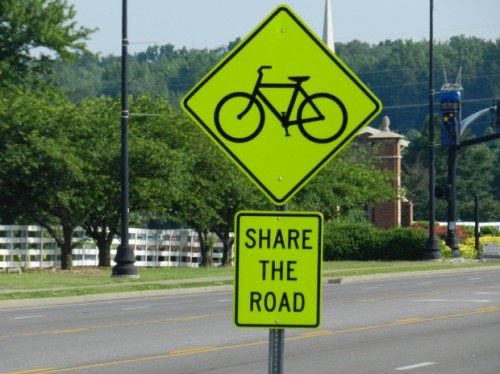 Since 2014 all trucks are supposed to have road census control device
This entry was posted in Traffic and tagged cycling, law. Bookmark the permalink.