Interesting principle that likes to be held in various life situations. I take it some time ago, as a politician spotless began to proclaim it as a principle for assessing brat. It symbolizes the principle that a person may be wrong, but can not be customer confusion rule. Last time I proved to give a maximum of three chance, if the same type of bread from the store. Or rather more correctly I should write “bakery product”.

In the summer we spent a lot of time in our natural garden, with a partner we wanted as soon as possible to plant all the trees, shrubs, ornamental flowers and vegetables and create flower beds and nooks for us as soon as possible transformed neglected meadow of flowering and fruiting garden. If you were in a similar situation, so you know it’s really time consuming. Of course we also go to work and take some time and preparation of food. In summer it can be seen late at night and therefore we večerievali just in the garden. But prepare food there really can not, not counting barbecue. So we wore the food out of the house and we often combine bread, meat products and our fresh vegetables. Bread can also be prepared at home, bake sourdough honest.

One of the customers in our garden brought bread. Together we posedeli, talk, and we put the smoked sausage with this purchase your bread. Taste quite interesting in the spirit of the current “zrných” inspiration and trade customers contained in the way of all sorts of kinds of beans, I have identified and soy. The dark gray color of the crust to the road should evoke healthiness, because people believe that if the bread is not white, it’s healthy. Well, I easily found by touch, even without reading the composition of the dough is soft, so the color of wheat and it apparently gives some chemistry, some dye. Because really dark bread, that rye flour is solid, not a bun. 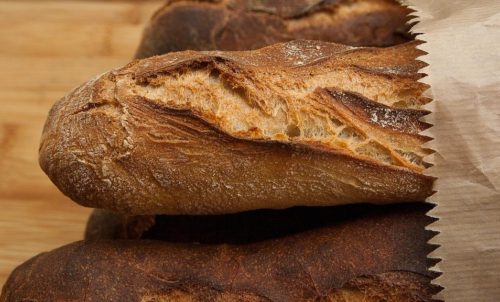 Thus, we posedeli, talk, sausage and bread zajedali peppers and tomatoes from the beds and in the evening we said goodbye. Come for a visit, I could not forget, the whole night I had a heaviness in the stomach and head hurt me. On one particular place where the bolieva whenever I have problems with digestion. Since it does not happen often surprised me. Maybe I’m sociable little debate to score the amount of food just like to look around.

In a few weeks I had to mention this Felling bread when we were shopping at one of the two German supermarket chains that sell it, as I later discovered. And I found out also that it is delivered as frozen bread and the store-finished, sold as fresh. Even so, we said that we give him another chance. At home we pochutili, but this time not with sausage. However, the result was the same. At night, heaviness in the stomach, headaches, at dawn, I could not sleep for several hours. It did not help or have a glass of water or herbal tea, problems stopped until the afternoon. Almost to the day after eating this bread.

The pain is unpleasant, it will not allow man was to concentrate on work or anything else. The whole morning I was practically just climb over the couch back and forth is passed around the apartment, he went out to the balcony for fresh air. It does not help anything, even a small dram. Crispy bread with good taste is not worth it. 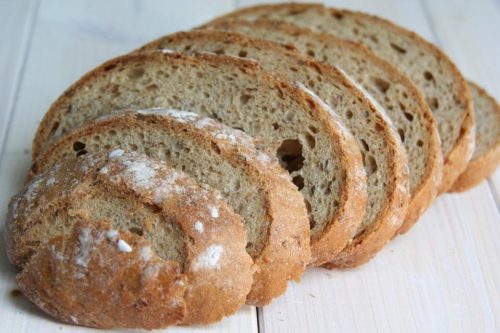 I gave it lumberjack meal one more chance. Third, the last. In one way by car, I could not manage to lunch at his favorite restaurant, so I addition to buying other things in the garden one Felling bought the piece. This time I ate it with no meat. So I got the third lesson. Last. He had a classic course. First, good taste, crunchy consistency, then rub on the stomach at night and headaches early in the morning, for it was impossible to sleep. I spent the morning on the water and tea, I’ll catch up with missed work over the weekend.

Frozen preparations so long endured, in addition to ordinary flour and yeast are added to the dough and other chemicals, which are designed to improve the consistency of the dough. Intermediate product can be quickly browning, but nedopečie is a deeply frozen. Some sources claim that in such a state can be transported and stored in Europe and three quarters of the year, until finally hits the grate furnace bake-off in the store, where the fresh dopekance customers served several times a day, and their fragrance attract them to purchase.

Three times I’ve proven home instead of sourdough bread or a certified wheat rye sourdough-yeast bread from a local store gave-finished bakery products from multinational supermarket chains. A three times for me did not fare well. For myself I can say that enough. I will not cram chemistry and dyes that are in bakery products are only to manufacturers and dealers increase profits.

Each regards their own good. Me as my health.

Ten cents is not money?

Who earns the cheaper gas?
This entry was posted in Bussiness and tagged health, money. Bookmark the permalink.